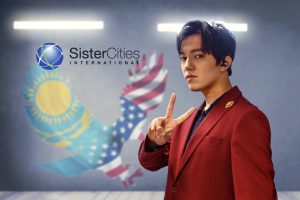 We are beyond thrilled and excited that Dimash will be joining our SCI family to formally recognize President-Elect Joe Biden and the incoming administration. His participation in our event further strengthens the ties between Kazakhstan and the United States. This will be the first time in SCI’s 67-year history and since U.S./KZ relations began that an artist from Kazakhstan has collaborated with the United States for such an occasion.

Dimash has represented his country and his people all over the world. As his country’s unofficial global ambassador, many consider him a national treasure. Given Dimash’s global visibility and commitment to citizen diplomacy, he aligns very well with Sister Cities International’s mission and global network.

As his generation’s Andrea Bocelli, his gifted singing ability and deep patriotism inspires and uplifts people from all over the world.

SCI welcomes him and looks forward to using the symbolism of his performance to build a stronger bridge of citizen diplomacy, as well as demonstrating the deepening of ties between the two nations.