Wunderbar Together: Celebrating Columbia and Kaiserslautern’s Common Love for Creativity

For more information on the Columbia World Affairs Council: 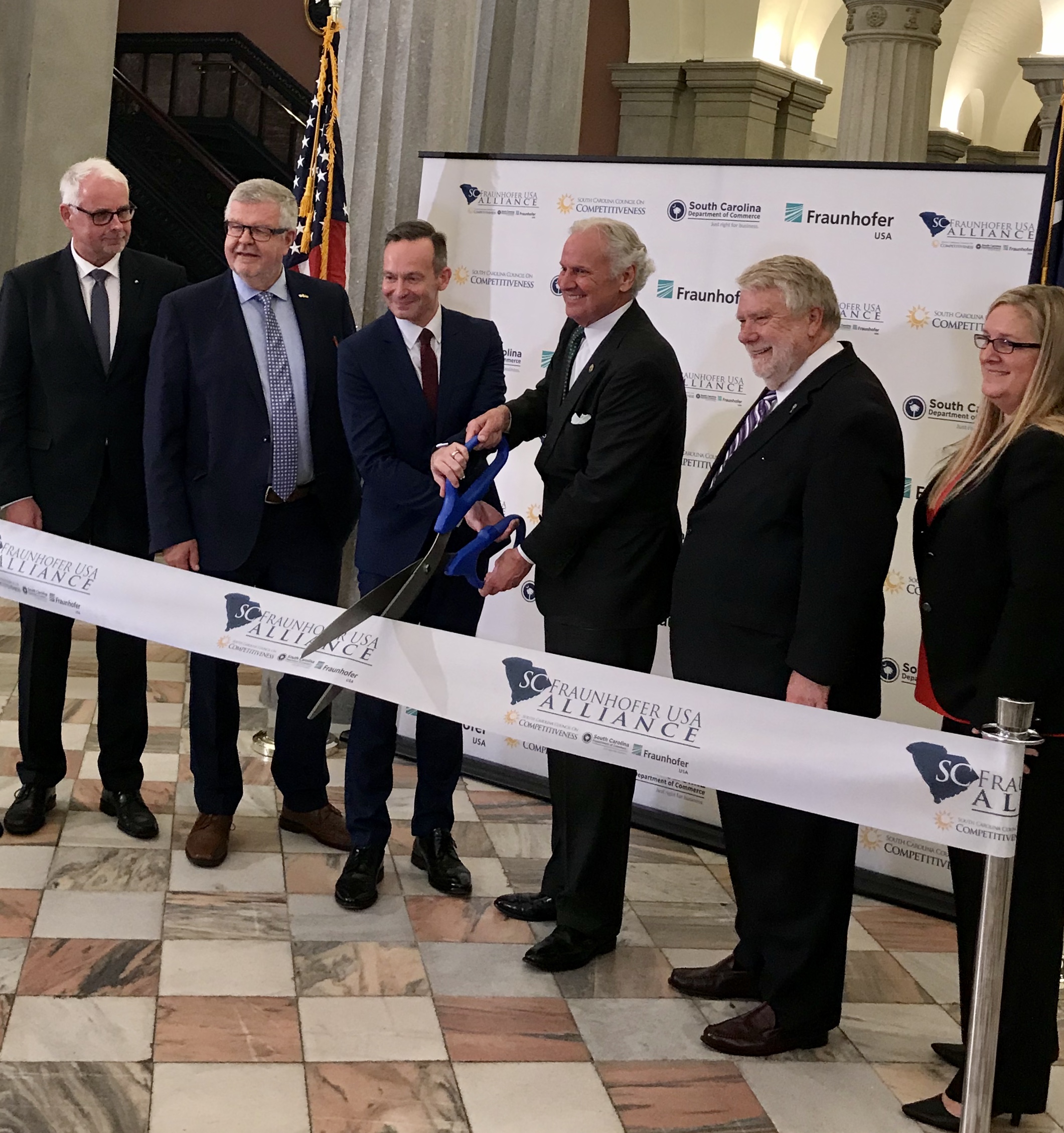 SCI: Could you tell me a bit more about the partnership and programs between Columbia and Kaiserslautern? How can these programs continue to expand to address global challenges on a local scale?

While Columbia, South Carolina and Kaiserslautern, Germany officially became sister cities in 2000, the relationship began a couple of years prior. Discussions began in March of 1998 as a result of the Transatlantic Conferences, particularly the Tourism and Economic Development Conference in Bingen. During the conference, Columbia World Affairs Council (CWAC) representatives visited the new Business Innovation Center and the Fraunhofer Institute for Experimental Software Engineering. The Fraunhofer meeting would prove to have a great impact for South Carolina 20 years later with the recent founding of the South Carolina Fraunhofer USA Alliance. The relationship between the cities also expanded to a sister state pairing between South Carolina and Rhineland Pflaz, where Kaiserslautern (affectionately known as K-Town) is located.

Building on numerous cultural, academic, and economic exchanges over the past 20 years, the Columbia World Affairs Council was proud to host two major visits from Kaiserslautern in 2019:

First, during the early summer CWAC presented Stars and Stripes Over the Rhine, The American Occupation of Germany after WWI, 1918-1923. Then later in the fall, CWAC hosted Heimat/Home: The 2019 Columbia–Kaiserslautern Artists Exchange from September 30 through October 11. More on these exchanges below…

SCI: I understand that Columbia and Kaiserslautern recently participated in an artist exchange. Could you tell me more about this exchange, as well as other exchanges between the cities? 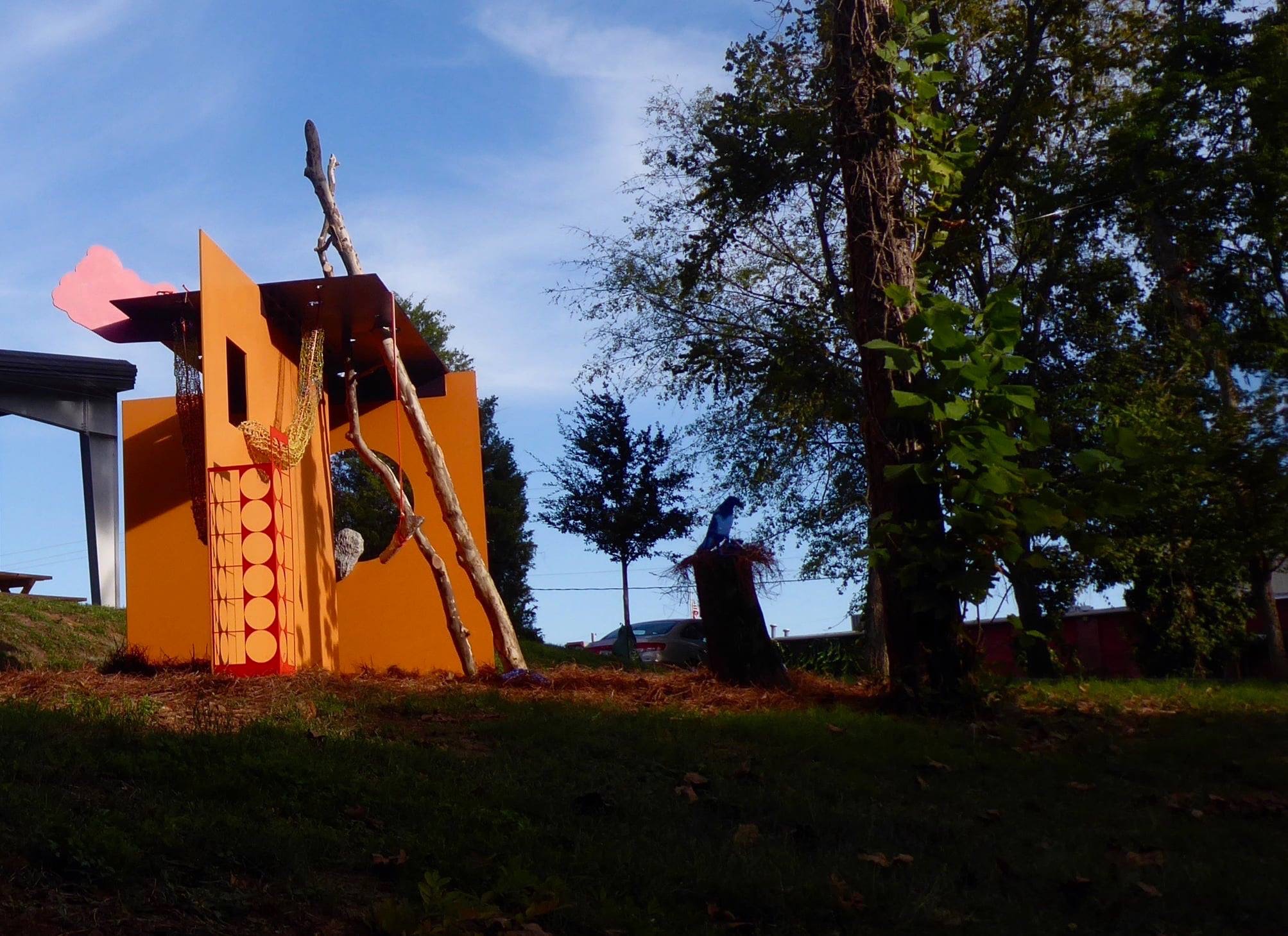 The Columbia World Affairs Council – in partnership with and with support from the Columbia Development Corporation, if ART Gallery, Lewis + Clark Studio, Stormwater Studios, the Embassy of the Federal Republic of Germany, and the Goethe-Institut in Washington, DC – presented Heimat/Home: The 2019 Columbia–Kaiserslautern Artists Exchange from September 30 through October 11. This was the latest in an artist exchange between Columbia and its sister city in Kaiserslautern, Germany. The 2019 symposium, celebrating both the 30th anniversary of the fall of the Berlin Wall and the 100th anniversary of Bauhaus (the enormously influential art school in Germany), features talks, an panel discussion, performances, and an exhibition by artists in both cities. It culminated in the unveiling of a collaborative public artwork created and installed on site at Stormwater Studios! 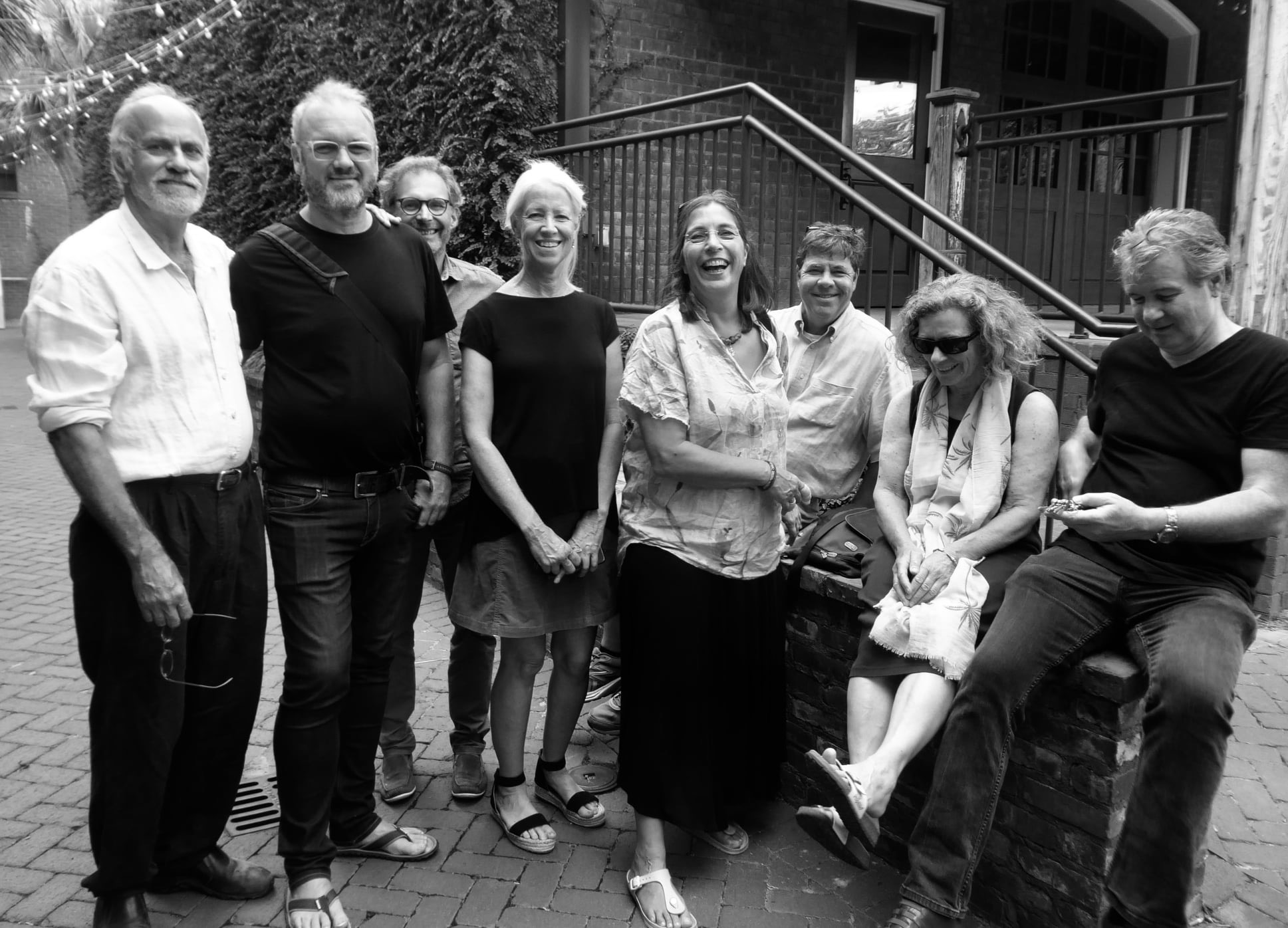 100 Years Bauhaus: Its Influence on Art & Architecture Then & Now, a talk by German native Mirjam Gerlach, Quackenbush Architects and Planners, Columbia, S.C., about one of most influential art schools in modern art and architecture. 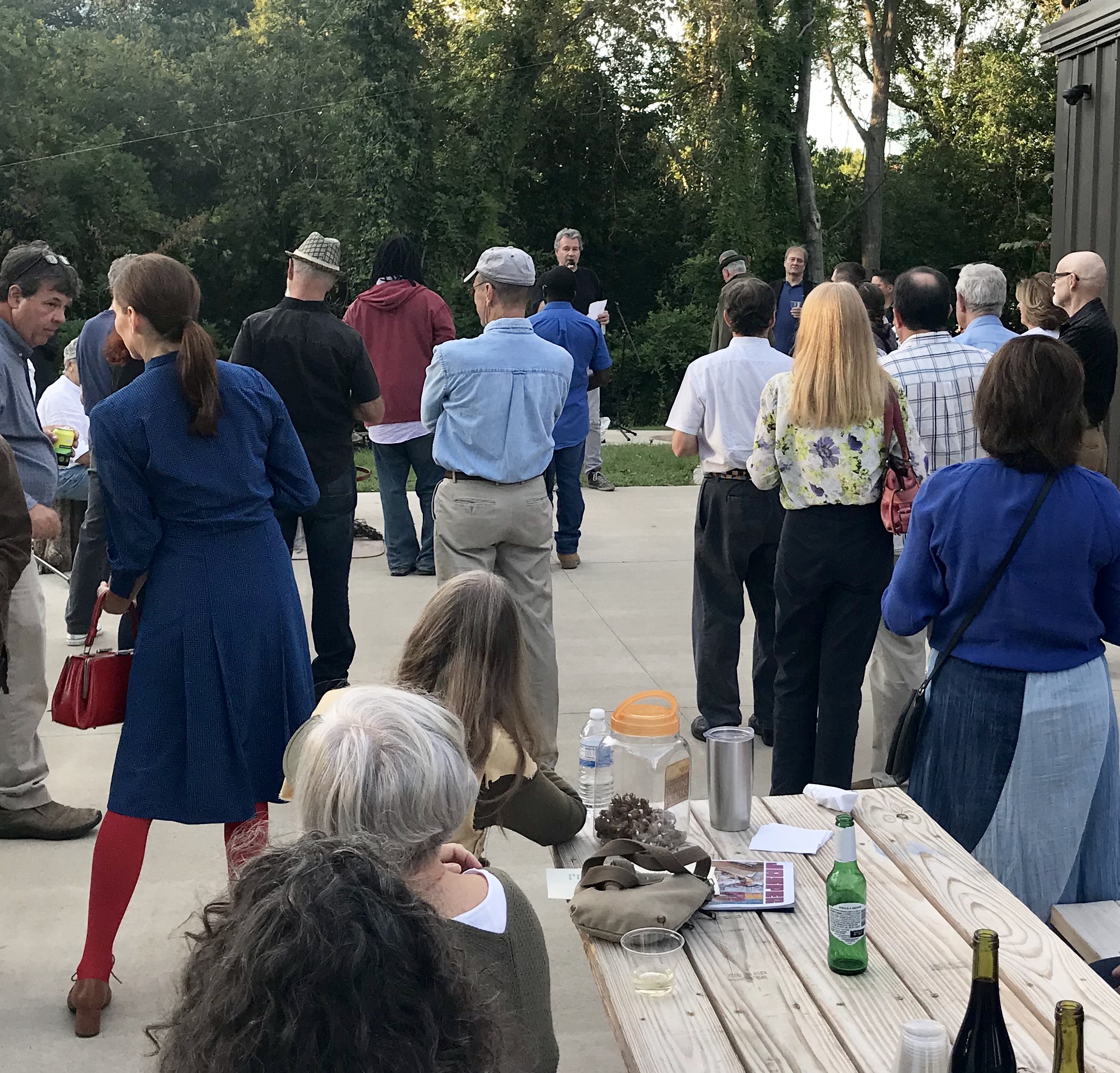 Benefits of International Artists Exchange, a panel discussion with participants in the exchange between artists from Columbia and Kaiserslautern, Germany – which has been going on for almost 20 years – discuss the benefits of international exchange.

Since 1989: New Art in a Multicultural Germany, a talk by Dr. Peter Chametzky, art historian, University of South Carolina School of Visual Arts and Design (SVAD), about the changes in Germany art since the fall of the Berlin Wall and the influences of an increasingly multicultural landscape in the country.

And the grand finale was the unveiling of Columbia’s new public artwork at Stormwater Studios followed by performances and a reception. Performers included poetry by Al Black and Star, songs by Lang Owen, performances and songs by Janet Orselli, as well as poetry and songs by Cassie Premo Steel and Susanne Kappler.

“We are excited to welcome our friends from Kaiserslautern back to Columbia,” said Columbia World Affairs Council Executive Director Dickson Monk. “The collaborative exchange of artists between the sister cities, going back almost 20 years, continues to flourish with amazing creativity and depth. The visits are hallmarks of citizen diplomacy developing the cultural vibrancy of our cities with artwork for generations to enjoy as well as lifelong friendships between our communities. We look forward celebrating Columbia – Kaiserslautern’s close relationship over the next two weeks.”

The project is a partnership between the Columbia World Affairs Council (CWAC), the Columbia Development Corporation (CDC), if ART Gallery, Lewis + Clark Studio, and Stormwater Studios, all in Columbia, and the German Embassy and the Goethe-Institut in Washington, DC. Funding is provided by the Goethe-Institut, CDC, and CWAC. The funding from the Goethe-Institut is part of the organization’s nationwide initiative, Deutschlandjahr USA/Year of German-American Friendship, under the slogan Wunderbar Together/Germany and the U.S. 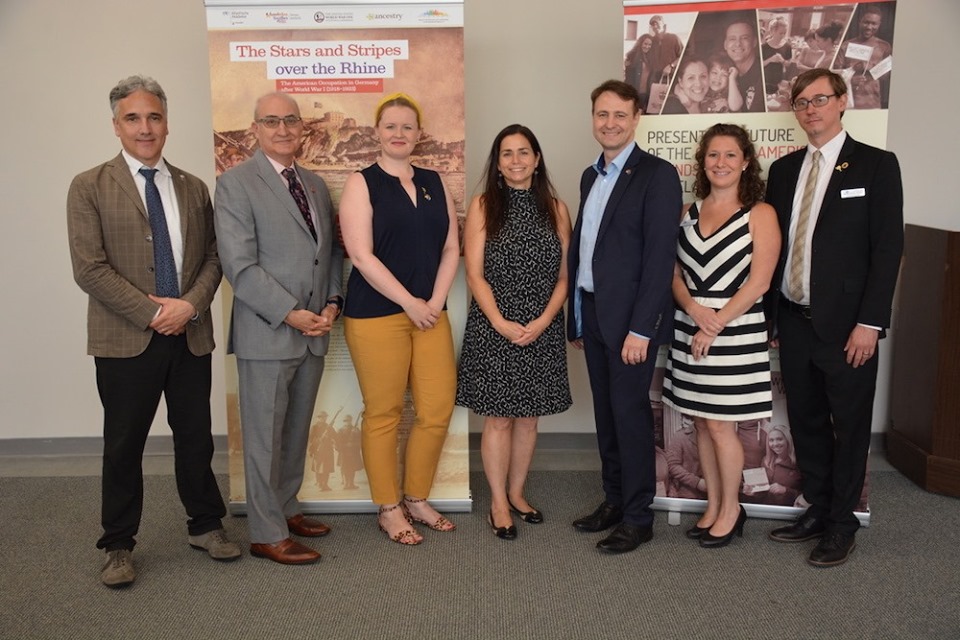 Kai Sprenger, David Hamon, Sarah Wagner, Honorary Consul of Germany to SC and GA Elizabeth Gibbes, David Sirakov, Tia Nelson, and Dickson Monk at the Stars and Stripes Over the Rhine, The American Occupation of Germany
after WWI, 1918-1923 exhibition

SCI: Could you tell me more about the recent exhibition that Columbia and Kaiserslautern collaborated on at the Atlantic Academy?

As part of the Wunderbar Together initiative, CWAC, in partnership with the Atlantische Akademie Rheinland-Pfalz e.V. the Koger Center for the Arts, as well as the Institut für Geschichtliche Landeskunde an der Universität Mainz e.V., and the WWI Centennial Commission, presented Stars and Stripes Over the Rhine, The American Occupation of Germany after WWI, 1918-1923. The exhibition, on view at the Koger Center for the Arts from May 31-June 30, 2019, highlighted the often forgotten history of the U.S. occupation of Germany after World War I and illustrates the multifaceted German-American relationship between 1918-1923. The show included panels of interesting historical information, rare pictures, and more. The exhibition was brought to Columbia by David Sirakov (director) and Sarah Wagner (education manager) of the Atlantic Academy, who were joined by Dr. Kai-Michael Sprenger, Institute of Historical Regional Studies, University of Mainz and David Hamon, Director, World War I Centennial Commission. 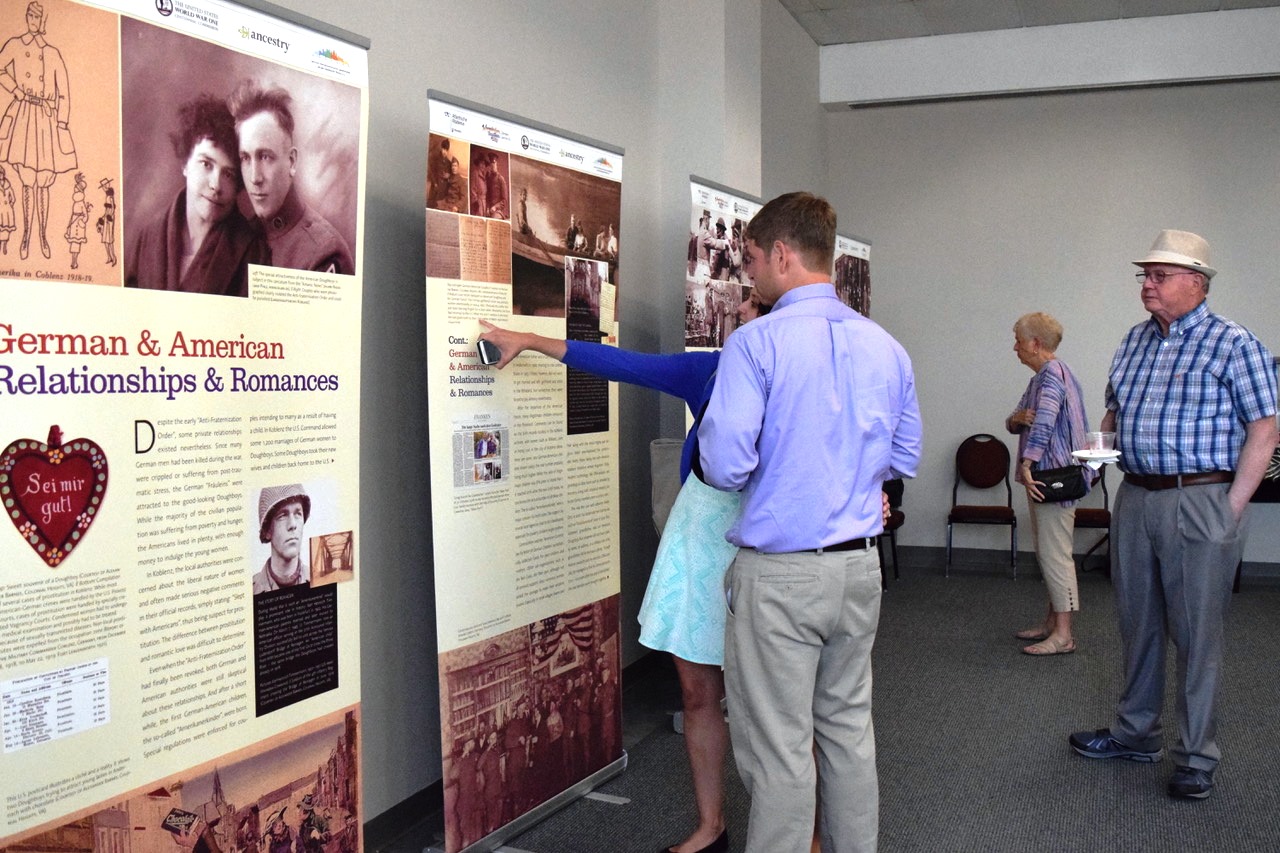 The opening reception on Friday, May 31, was a festive occasion and well-attended by local officials, CWAC members, and the general public. This program marked a new partnership between CWAC and the Koger Center for the Arts, which saw collaborations on two other exhibitions (both from Belgium) over the summer.

SCI: Do you have a particular anecdote, a lesson, or an experience that shows the meaning of these exchanges, including any lasting friendships/ties formed?

People-to-people exchanges are the most important bonds resulting from international exchanges. The exchange between Kaiserslautern and Columbia artists is a great example. The first exchange nearly 20 years ago resulted in lifelong friendships that have spawned numerous collaborations and exhibitions over the years in both cities. These activities grew organically out of a common love for creativity. Each year the artists look forward to possible visits, but always stay in close communication. The permanent public art works in both towns are a joy to be shared with generations to come.

SCI: In your experience, how does the citizen diplomacy and information exchange facilitated through this partnership build mutual respect, understanding, and cooperation?

Citizen diplomacy proves in a very real way that people are people, no matter the nationality. We all share the same hopes and dreams. It is truly magical to see people coming from diverse cultures coming together to discover common bonds that result in enduring friendships.

Privacy & Data Consent (GDPR - CCPA)
To provide the best experiences, we use technologies like cookies to store and/or access device information. Consenting to these technologies will allow us to process data such as browsing behavior or unique IDs on this site. Not consenting or withdrawing consent, may adversely affect certain features and functions.
Manage options Manage services Manage vendors Read more about these purposes
View preferences
{title} {title} {title}

Do you need assistance?

Send us a message with a single click. We will reply as soon as possible.